Young Thug and Gunna among several members of their YSL outfit are facing down years in prison in huge RICO case.

Young Thug, Gunna, and 28 of their YSL comrades are facing serious jail time after Fulton County Police dropped a shocking 56-count indictment on Monday evening, which outlines several charges, including one that says Young Thug had a hand in the murder attempts on the life of YFN Lucci earlier this year.

The charges have been laid under the Racketeer Influenced and Corrupt Organizations (RICO) Act which is a federal law that criminalizes acts of an ongoing criminal organization.

On Monday night, WSBTV reporter Michael Seiden broke the news that Young Thug has been arrested on two charges from the indictment, which names his co-collaborator Gunna and 28 other members of YSL in a lengthy indictment that covers offenses committed that violate the RICO act, murder, armed robbery and participating in criminal street gang activity.

A photo shared online by Seiden shows Young Thug being detained by police officers earlier on Monday night. Thug, whose real name is Jeffery Lamar Williams, is being held at Fulton County Jail in Georgia.

He has been charged with the two offenses and is set to make his first court appearance on Tuesday, May 10, 2022. The rapper’s mugshot has been released, with him wearing a white vest and with a serious look on his face as he faces the camera.

Gunna, whose real name Sergio is Giavanni Kitchens, has also been charged.

The 88-page indictment is said to contain damaging allegations against the rappers and YSL members.

According to Seiden, who shared excerpts from the indictment, prosecutors say that YSL is a criminal street gang that claims affiliation with the national Bloods Gang and that the criminal enterprise started in late 2021 in the Cleveland Avenue area of Atlanta. The indictment also names Thug as a founder of the organization.

YSL’s founders were Jeffery Williams AKA ‘Young Thug’, AKA “Slime”, Walter Murphy AKA DK, and Trontavious Stephens AKA Tick AKA “Slug.” 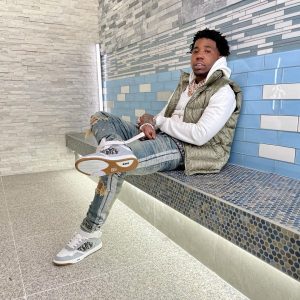 And the indictment also claims that Young Thug had a hand in the attempted murder of YFN Lucci, who was stabbed during a fight in jail earlier this year. The indictment says YSL associates Christian Eppinger and Antonio Sumlin allegedly worked to get the permission of Young Thug as they made a second attempt to take the life of YFN Lucci while he was held at Fulton County jail.

Few other details about the charges against the rappers were also released, which included that Young Thug allegedly rented an Infiniti Q50 Sedan in 2014, which was later used to commit the 2015 murder of a man named Donovan Thomas Jr. whom police say was a rival gang member.

As for Gunna, police named him an associate of YSL, stating that he appeared in a video “Fox 5” wearing paraphernalia proving his affiliation to the gang, and his lyrics are being quoted as part of the prosecution’s case.” We got ten-hundred round choppers,” the lyric said.

Gunna has not been arrested as yet, but the rapper appears to be out of state. His latest posts on Instagram were from Sunday, showing him at a show in Washington DC, while he also shared videos of him buying a brand new Audemars Piquet watch on Monday.

JUST IN: @youngthug booked into @FultonSheriff on charges of Conspiracy to Violate the Racketeer Influenced and Corrupt Organizations Act & Participation in Criminal Street Gang Activity. He will make his first appearance on Tuesday at 1130 am. @wsbtv pic.twitter.com/LRSeus8Lsc

“YSL’s founders were Jeffery Williams AKA “Young Thug,” AKA “Slime,” Walter
Murphy AKA “DK,” and Trontavious Stephens AKA “Tick,” AKA “Slug.”

Prosecutors allege that two associates of YSL, CHRISTIAN EPPINGER and ANTONIO SUMLIN, worked to get permission of @youngthug to make a 2nd attempt to murder @YFNLUCCI while he’s jailed in Fulton County. @wsbtv @MarkWinneWSB