Shenseea is set to hit the stage at Billboard’s first MusicCon event to be held ahead of the BBMA’s weekend.

Shenseea is joining a host of artists like Brazilian singer Anitta, Burna Boy, and others for the Music Con event.

Her latest booking adds to the rising talent’s strides in the music industry to cement herself as a fixture in the hip-hop music industry.

The latest move adds to the growing team the dancehall superstar has hired to assist with her music career. She is already signed to producer Rvssian’s Rich Immigrants record label in partnership with Interscope Records and has a management deal with We Good in partnership with Wassim ‘Sal’ Slaiby’s SALXCO.

In the meantime, the MusicCon event will offer the blooming talent to perform in front of other artists and fellow music industry people while creating the perfect networking opportunities. 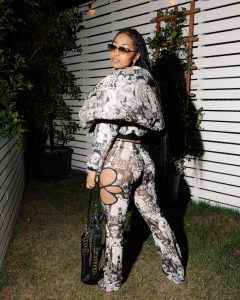 MusicCon will be the prelude to the 2022 Billboard Music Awards, hosted by Diddy, and will air live on Sunday, May 15, at 5 p.m. PT/8 p.m. ET on NBC from the MGM Grand Garden Arena in Las Vegas.

MusicCon is not only performances from artists but will be a full two-day worth of engaging conversations as Billboard aims to celebrate top-charting artists, producers, songwriters, and creators who all work to push the music industry.

The two-day event takes place on Friday, May 13, and Saturday, May 14, at Las Vegas’ newest immersive entertainment venue AREA15.

The panel discussions will focus on music executives in the industry as well as discuss the impact of genres and cultures. The company announced several confirmed panels, which include “Women on the Rise – Management 101” with top industry managers Dina Sahim (who works with Swedish House Mafia, French Montana), Alex DePersia (Pharrell Williams, Gracie Abrams), and Nelly Ortiz (DJ Khaled).

There are plans to add more panels as well as performers to the event, which will be held for the first time in person.

“We are so thrilled to be back in-person for the first Billboard Music Awards in two years,ll” said Julian Holguin, president of Billboard said in a Billboard release. “We couldn’t think of a better time to launch Billboard MusicCon, two robust days of world class programming with one-of-kind access to artists, creators, and industry leaders discussing and celebrating the ever-evolving music industry.”