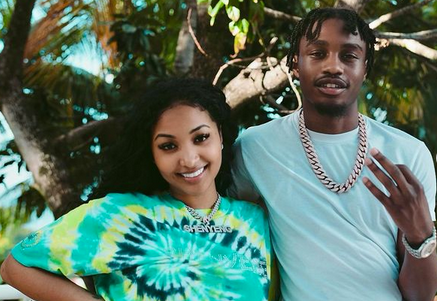 Shenseea looks set to nab herself yet another international collaboration after recently linking up with Lil Tjay.

The “Lighter” singer recently took to Instagram to announce that she was in the studio with the American rapper. “All we do is work” she captioned the photo while tagging the 19-year-old New York native.

In another photo, the two superstars could be seen staring at a laptop while chilling in the studio.

Shenseea further teased fans as she posted clips of her singing Lil Tjay’s new track “Calling My Phone” to her InstaStory. The track was the No.1 streaming single on Spotify and Apple Music upon its release in mid-February.

Lil Tjay is currently working on his album which could mean the collaboration is meant for his project. However, Shenseea is also due to drop her debut album this year also and it could appear on her set.

Last November Shenseea told Hot 97’s Ebro that she was working on her album. “I’ve never released an album before, I wanna see how well it’s gonna do. I wanna see how people gravitate to the different kinds of music I’m putting on there. Hopefully, we’re really aiming for March they say.”

Lil Tjay is only the latest international act Shenseea has been spotted with in recent weeks. Earlier this month she also teased fans on Instagram after posting several pics with R&B starlet H.E.R.

“We’ll soon let them know what it’s gon’ be! In the mean time, we doing our thing,” she captioned the post.