Shenseea is about to drop one of the biggest collaborations of her career, a track with Megan Thee Stallion. The ultra risqué cover art of the two women was all about flaunting their ‘ass-ets’ and then some, as they posed on all fours together showing more leg and thigh than Colonel Sanders would serve in his spiciest bucket of finger-licking goodies!

Landing another huge international feature so soon into 2022, Shenseea has paired up with the “Savage” artiste for the soon-to-be-released single titled “Lick.” Much is expected from the collab as this will be the first time that a Jamaican female entertainer has joined forces musically with Megan. She had previously collaborated with popular deejay Popcaan on the 2020 track “Intercourse.”

Giving her Shenyeng fans something to tweet and talk about, the “Run Run” entertainer promised the new track come Friday, January 21st. Her fans were none the wiser that she had been in the studio with the Texan rapper, a female rapper known to freestyle with the best of them.

It was neither her rap nor freestyle skills that were on display in the image Shenseea shared on her Instagram, as the two women boasted a pink, purple and yellow costume theme. Still, there was not much material to either of their costumes as Megan the hottie had on a bright yellow bodysuit with a pink wrap around her waist. 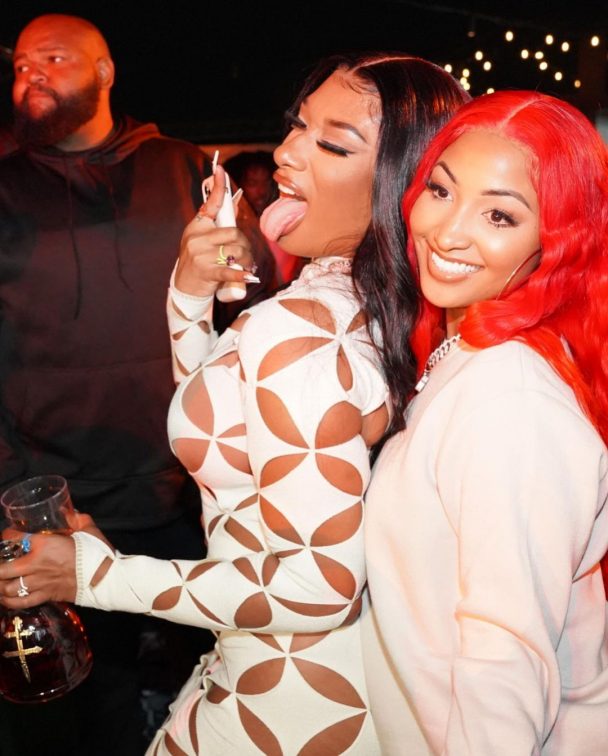 Shenseea was contrasting in wig colors because while Megan Thee Stallion was sleek with a black ponytail, she went beast mode with a canary yellow wig, orange, and pink bodysuit, then topped it all off with yellow fishnet stockings. The two seemingly had fun during the photoshoot as it seemed like a ‘Twerkfest’ took place right there and then. To say fans of both women are excited would be an understatement. On Shenseea’s page, they celebrated as if the song was already out.

One fan commented, “I knew this day was coming. They gonna break the internet with this video. Bad gyal and the Stallion.” Another fan gushed, “Oh sh*t! This is going to be a banger! Booty and barz! Me love the song already and me nuh even hear it!”

The female’ dream team’, as they have been dubbed, is not that much of a surprise to die-hard Shenseea fans. Back in November, Megan had shared in a tweet that she was interested in working with the dancehall singer on a track, which they then took from a wish to reality. The two have also been observed hanging out together at social and entertainment events.

Last week, ShenYeng’s fans had begged for a collaboration with Sean Paul and Nicki Minaj, and while Shenseea noted that she did not yet have that under lock, it is surprising that she didn’t give away this golden collab with her new bestie Megan Thee Stallion.