A very pregnant Rihanna and A$AP Rocky stepped out for the first time since his arrest at LAX for her baby shower dinner date.

Rihanna is sticking by her baby daddy, A$AP Rocky, after he was arrested last week for allegedly shooting at an acquaintance. Days before his arrest, A$AP Rocky was seen in Barbados with Rihanna, who is rumored to be getting ready to give birth on the island.

However, it seems that plans have changed a bit as Rihanna returned to California and was seen on Saturday night during a date with Rocky following his arrest days before.

The two were seen at celebrity spot Giorgio Baldi in Santa Monica, California, with a stunning Rihanna making a fashion statement as usual. Baring her baby bump, the singer and Fenty Beauty mogul sported a pair of glittery black shorts with a black matching bralette and a white blouse along with a black jacket and black purse paired with silver heels.

A$AP Rocky also dressed for the weather, wearing a grey hoodie suit with white floral designs along with a bedazzled belt, grey tee, and glitzy jewelry.

According to news reports, the couple was celebrating their baby shower dinner, which saw a host of other stars also attending and supporting them.

A t-shirt image shared online is purportedly from the baby shower, which shows the two singers in their pre-teen years and their names Robyn and Rakim emblazoned on the front. 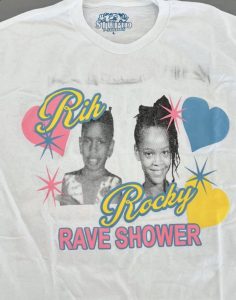 The couple’s latest outing comes following the shocking arrest of Rocky at LAX airport after returning from Barbados.

According to police reports, the shooting incident occurred after an argument between “two acquaintances” escalated. Rocky is accused of being the suspect who allegedly fired a handgun at the victim before running away.

In further developments, a report from TMZ also said that police executed a search warrant at Rocky’s house in California while he was out of the country. Police reportedly got into the home using a battering ram, and they reportedly took a box of potential evidence.

A$AP Rocky has not officially addressed the latest legal issues he is facing.

The rapper was arrested and charged with assault causing actual bodily harm in Sweden in 2019 and spent over a month in jail while awaiting trial.

Among those who stood up for the rapper are former President Donald Trump and rapper Kanye West and his ex-wife Kim Kardashian who pleaded for his release. Rocky had claimed that he acted in self-defense concerning the alleged assault, and his mother had also alleged that prosecutors in the case were racist and bent on punishing the rapper.

Rihanna and ASAP Rocky out in Los Angeles (April 23). pic.twitter.com/fqHaUzZBFg