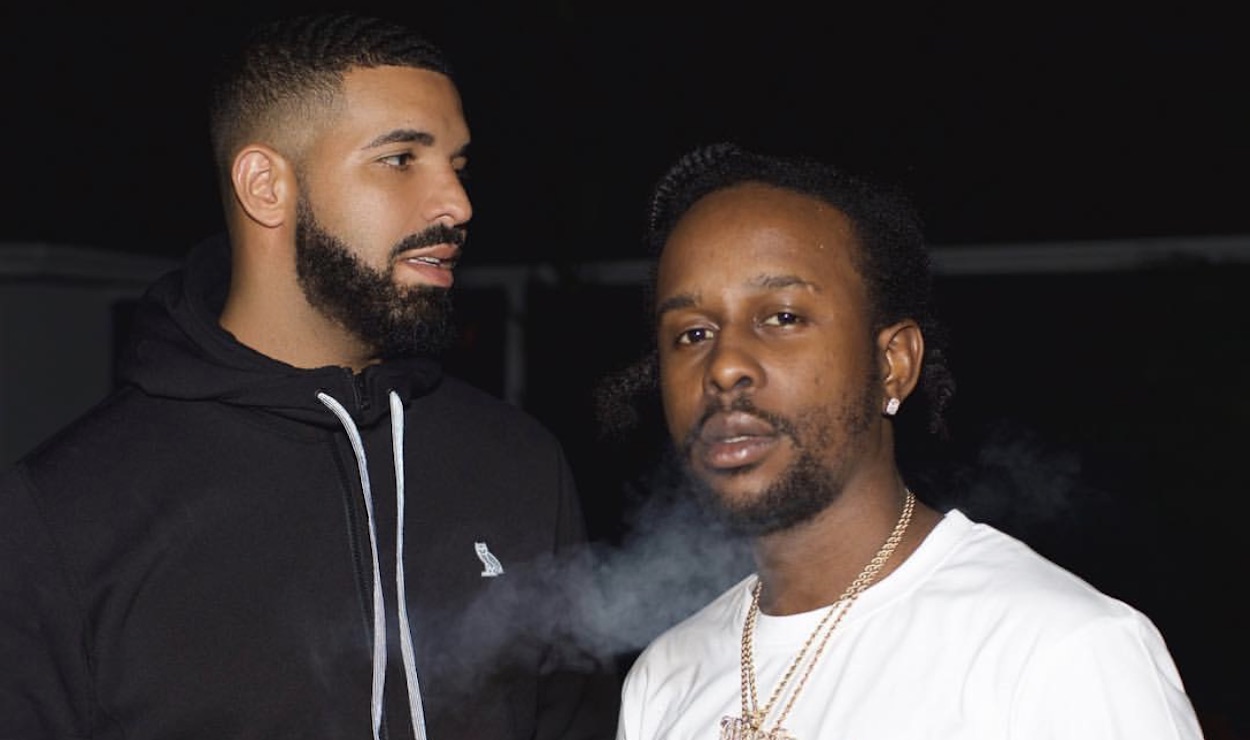 Celebrities in music are lending their voices to a crucial human rights issue in Nigeria. The ongoing call to put an end to SARS is a social media campaign that was launched in 2017 with Segun Awosanya one of the firsts to use the #ENDSARS hashtag to champion for the disbandment of a Nigeria Police Force special Criminal Investigation and Intelligence department called Special Anti-Robbery Squad (SARS).

The police squad has earned a despicable reputation since its inception in 1992. While SARS was designed to be an undercover force tasked with investigating crimes of a certain nature like armed robberies, vehicle theft, kidnapping, and crimes associated with firearms, the unit has been accused of murder, theft, rape, extortion, unlawful arrests and detentions, police brutality, and other heinous crimes during their almost three decades of operation.

SARS has allegedly become notorious for extorting young Nigerians who are targeted for gadgets like their iPhones and other luxuries like high-end vehicles. In addition to profiling, the special police force is accused of engaging in kidnappings, extrajudicial killings, mounting illegal roadblocks, stop and search, and torture. Amnesty International reported that SARS has a history of abusing human rights with the vile mistreatment of their countrymen while in custody, which entails shooting detainees in the leg; cruelty including threats of execution, severe beatings, and hanging. This year, the publication reported that they have recorded more than 80 cases of extrajudicial killings and abuse by SARS between January 2017 and May 2020.

The call to end police brutality in Nigeria has extended itself to local, international, and online protests. When a video went viral on social media on Saturday, October 3, which documented a SARS operative in Delta State shooting a young man after allegedly seizing his Lexus SUV, it reignited the passionate call to end police oppression in Nigeria. More videos showcasing the immoral practices of the notorious police force soon surfaced online and served as evidence of harassment, extortion, and brutality.

While some influencers like Afro-beat giant Burna Boy have been a part of the campaign for a number of years, its recent resurgence exacerbated by the growing #ENDSARS trending hashtag, which amassed over 28 million tweets in a single weekend, has popularized the movement in a contemporary way that raises awareness worldwide. Citizens residing in Nigeria and the diaspora have been protesting for an end to SARS for years, but the conversation made headlines this month after the high profile celebrity juggernaut began to weigh in.

With artists like Popcaan, Drake, Cardi B, Kanye West, Kranium, Chance The Rapper, Diddy, and more speaking out against the long-hauled human rights issue, we could only hope that the Nigerian government would be compelled to address the issue head-on. On Friday, Chance shared a message to Twitter requesting more details on the SARS saga as he said he was just becoming informed on the issue. “#ENDSARSNOW I just started reading up on this travesty taking place in Nigeria. If you have more info to dispense in the replies I’m all ears,” he wrote. Drake also directed his fans to educate themselves on the important human rights issue and Stefflon Don shared a message about the cause on Instagram with the caption, “If this is Nigeria’s problem then it is ours too. I would like to know what the government is doing about this??? #ENDSARS’” 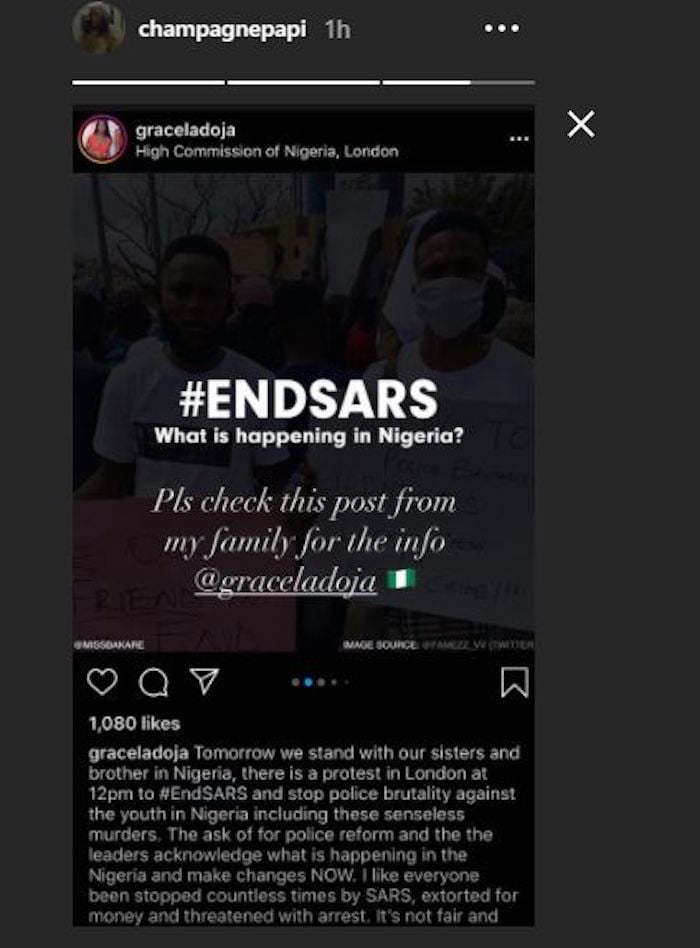 Cardi B hardly addressed the issue on Twitter before her account was suspiciously deactivated. When a Nigerian fan introduced the campaign to the rapper on Thursday, October 8, she replied asking, “What’s going? Can you give me a summary so I can research later ….you know I love Nigeria.” Shortly afterward, Cardi’s Twitter page became unavailable, and she took to her Instagram story to tell fans, “Imma get back active on 10/11.” Nigerian fans quickly started to speculate that it was all a conspiracy, with one Twitter user saying the Nigerian president “offed” Cardi’s account when the mention of the country’s inhumane operations was detected.

On Sunday, October 11, Nigeria’s Inspector General of Police announced the dissolution of the unit – a decision that some saw as great progress in the public outcry for police reform. United Kingdom-based Nigerian artist WizKid previously called out the Nigerian president for not addressing the police brutality issue that has only grown worse over the recent years. He led a recent protest in London, calling for an end to the Special Anti-Robbery Squad as well. WizKid addressed the protesters after news surfaced that SARS had been dissolved. He also reacted to the news on Twitter writing, “Now my people.. you see what our voices did…this is the beginning of a new Nigeria!”

However, many people could not help but feel like they’d been duped. The Nigerian government has reportedly gone on record to claim they have banned SARS at least four times now, and protesters are concerned that they only intend to reassign the officers rather than disband the department completely. Burna Boy was among the slew of celebrities who used their platform to address the human rights issue plaguing Nigeria. The statement he shared read in part: “My greatest concern in all of this is that SARS will end now as it allegedly has several times in the past and morph into a different entity down the lines with a different form or a different name.”

The statement continues, “In my opinion, abolishing the unit is a definite first step but we cannot afford to stop there. The major issue is PROFILING. THIS MUST BE ADDRESSED BY BOTH THE AUTHORITIES AND THE CITIZENRY. IT SHOULD NOT BE A CRIME TO BE A YOUNG PERSON IN YOUR OWN COUNTRY. The old adage that you cannot judge a book by its cover is a wise one.” Burna Boy also announced the establishment of a fund to help protesters who are arrested or harmed as well as the development of a platform to educate people on factual historical information and to support creatives and the tech community.

Protesters demanded five items from the Federal Government of Nigeria on Sunday, October 11. Among the list of demands, they asked for the immediate release of all protesters who had been arrested, compensation and justice for those who died at the hands of police brutality, the establishment of an independent body to investigate reports of police misconduct and prosecute offenders, adequate compensation for Nigerian police, and not least of them all, for the psychological evaluation and retraining of SARS officers prior to any reassignment to other police units.

Peaceful protests have been taking place in Nigerian cities and states like Ibadan, Lagos, Benin, Delta, Ilorin, Ogbomosho, Abuja, Owerri, Osun, Oyo, and more. The Nigeria Police Force disrupted the protests on several occasions, and during the season, they arrested, injured, and took the lives of many protesters. They reportedly opened fire and threw tear gas at peaceful protesters to disperse them. While the ongoing crisis is still a pressing matter, it is important to note that the Nigerian Government finally agreed to the five demands of the End SARS protestors on Tuesday, October 13, 2020. Members of the government body have condemned and called for an end to police brutality, the molestation of youths, and other foul abuses of authority.

Amid the Office of the Inspector General, the National Human Rights Commission, and other stakeholders convening to deliberate, a press release signed by the Presidential spokesperson announced that the government would give in to the demands of protesters. That same day, the Governor of the Nigerian State of Lagos vowed to establish a two hundred million naira fund for victims of police brutality residing in the state. The PR Officer for the Nigeria Police Force also announced the development of a new force called Special Weapon and Tactics Team (SWAT) created to replace SARS. The prospective operatives will reportedly undergo a medical and psychological evaluation during their screening.

Thanks to the widespread and global impact of social media, the End SARS campaign has received more attention than it ever has. Now it’s time to ensure the work continues and the reform is honored.