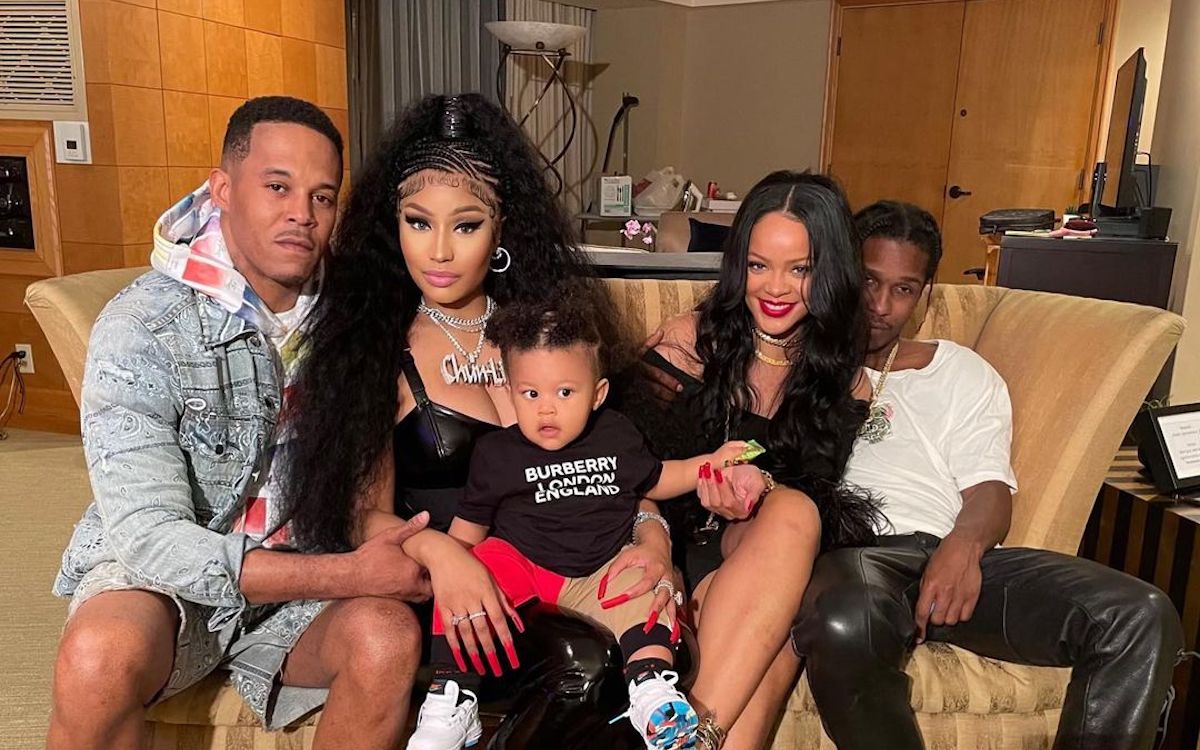 Nicki Minaj sent fans into a frenzy when she shared some new photos with Rihanna and A$AP Rocky hanging out for a double date and family get together for Labor Day Weekend.

One picture shows Nicki Minaj holding her son, surrounded by her husband, Kenneth Petty, on her right and Rihanna and her boyfriend, rapper A$AP Rocky on her left. “#RokNRiha #QueenRih #CaribbeanGirlsRunit Love her downnnnnnn #NewYorkShit #YKTFV,” Nicki Minaj captioned her post.

The 38-year-old rapper later shared a video of herself and Rihanna flaunting their black beauty until Rihanna said, “Caribbean things, you know what I’m sayin’?” in reference to the fact that they both are from the Caribbean. Rihanna was born in Barbados, and Nicki was born in Trinidad.

Before Nicki could continue the brag about the Caribbean, Rihanna blurts, “You know Bajans don’t like Trinis” leaving Nicki wide-eyed. She continued in her Bajan accent, “And Trini’s don’t like Bajans either. They draw a line in the ocean over flying fish. But that’s a different night, that’s for a different night.”

Cou cou served with flying fish is the national dish in Barbados, and because these small, winged fish are plentiful in the waters around the island, it has long been dubbed “the land of the flying fish.”

While Rih Rih’s claim is left to the public to argue, many fans are just excited that the two are hanging out together again.

“Doesn’t get any better than this!!” one person said, while another added, “GOD I’VE MISSED THIS SO MUCH!!! QUEENS!!!!!”

The “Diamonds” singer and the “Chun Li” rapper first worked together in 2010 on Rihanna’s single “Raining Men.” The two women also collaborated in 2011 on the hit single “Fly,” and fans believe the ladies are due for another.

One Twitter user speculated, “A picture and video of Nicki Minaj & Rihanna is breaking the internet in under 20 minutes of being posted. Imagine a collab… holy f**!”

While fans are wondering if the link-up is the announcement of an upcoming collaboration, Rihanna has not released new music for quite some time, despite calls from fans.

The 33-year-old Fenty Beauty entrepreneur/singer was officially declared a billionaire last month, and many social media users had concluded that this might be the end of her music career since she does not necessarily need it.

Still, others are hoping that the reigns of fellow Caribbean musician Nicki Minaj will be enough to pull her back to the music scene.