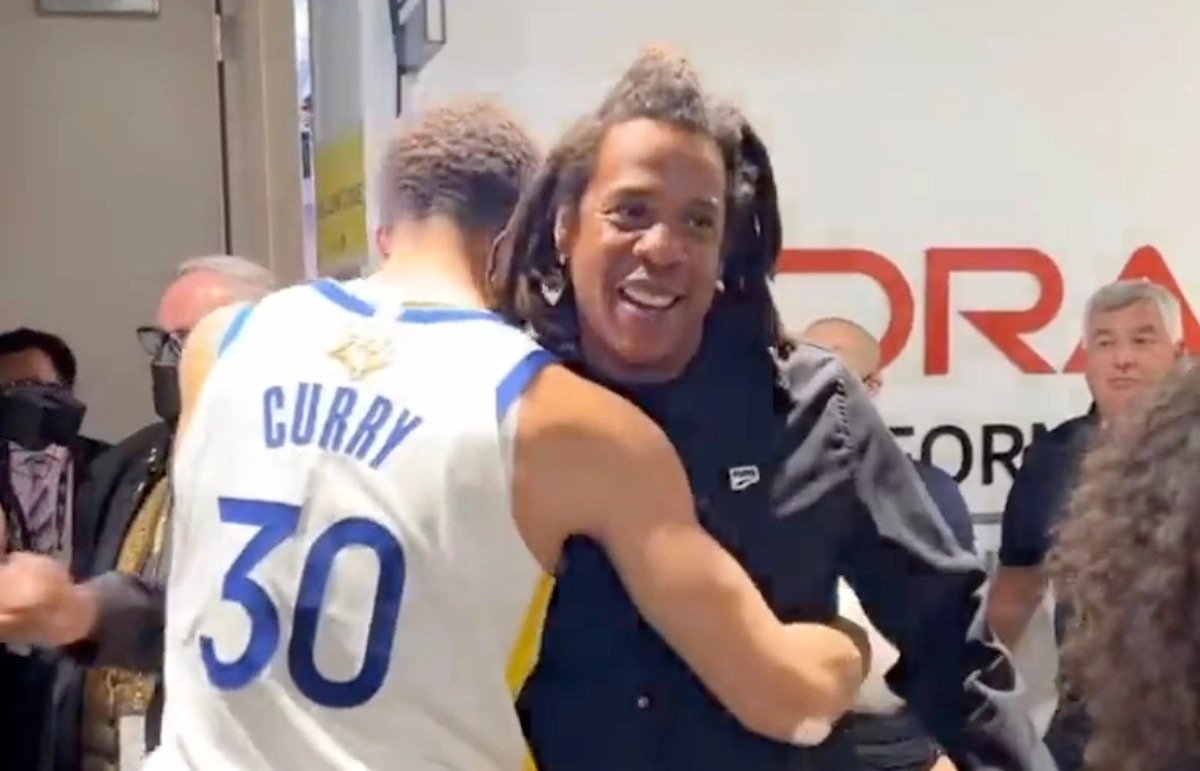 Jay-Z and his sidekick Blue Ivy Carter were out to take in the NBA finals as the Golden State Warriors took on the Boston Celtic in an intense battle to advance to win the title.

Blue Ivy has been in the news a lot lately, and while she has had nothing to do with that, a beautiful and immaculate Blue showed out surprising fans with her looks and fashion style on Monday night.

She and her father’s interaction were caught on camera as Jay-Z was acknowledged by one of the game presenters. However, Blue Ivy was the center of attention as many commented on her beauty and the fact that she was growing up quickly and was almost a young lady.

Their interaction has since gone viral as it shows the almost teenager not feeling her father mushing her into an embrace and crushing her head of big bouncy curls.

The daddy-daughter moment hilariously resembles what many parents come to realize after they have teenagers- every little thing embarrasses them. In this case, Blue can be seen blushing as her father plants a kiss on her face.

“Dad my hair,” she appears to say and tries to wriggle out of his embrace, much to her father’s amusement as he laughs.

While Beyoncé was not at the game, Blue was definitely serving looks with her leather jacket and black t-shirt underneath her trousers. Her curls framed her face while she also wore some tiny hoops earrings and had on a pink-tinted lip gloss.

Blue’s look has been much the topic of conversation this week due to unsavory comments made about her hair by RCA rapper Saucy Santana.

The tweets made six years ago when Blue was four years old compared her beauty to that of North West, the mixed child of Kim Kardashian and Kanye West. The rapper also called Beyoncé’s child “nappy headed’ which has since drawn backlash and threats of a boycott for Santana and his music.

The rapper has not apologized, only offering excuses as to why he would be commenting on the singer’s child. It seems that Santana’s egregious comments were discovered by Beyonce’s fan base called ‘The Beydive’ after he sampled her track for his own song “Booty,” featuring Latto.

While Beyonce has not reacted (as she never does), many of her fans have called for Santana to be canceled. Many have referenced the case of Keri Hilson being canceled by Beyonce fans back in 2013 after she wrote a diss track for Beyonce over a feature with Usher that she was left off of, and Beyonce replaced her.

Jay-Z and Blue Ivy Carter later met Steph Curry as he was heading into the locker room and congratulated him for winning Game 5 and going up 3-2 in the series.