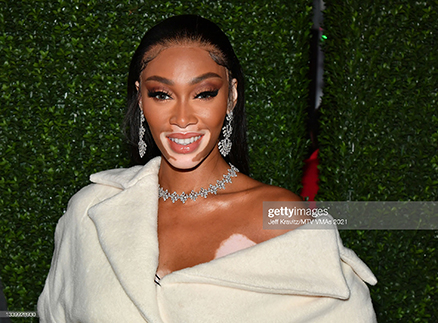 Born Chantelle Whitney Brown-Young, Harlow, gained prominence in 2014 as a contestant on the 21st cycle of the U.S. television series America’s Next Top Model.

Harlow was diagnosed with the chronic skin condition vitiligo, characterized by depigmentation of portions of the skin, at the age of four. She was a victim of bullying by other children and was reportedly called a “cow, zebra, and all manner of other disparaging slurs” throughout her childhood by students both black and white.

The verbal harassment led to her changing schools numerous times and dropping out of high school, after which she contemplated suicide. Harlow was discovered by America’s Next Top Model host Tyra Banks on Instagram, and subsequently became one of the 14 finalists of the 21st cycle in 2014. She was the only Canadian ever cast on ANTM but was eliminated in the second week of the finals.

Following her elimination from America’s Next Top Model, Harlow modelled for the Spanish clothing brand Desigual and became its official brand representative and in September 2014, she walked and closed for the clothing brand Ashish for its spring/summer 2015 collection in London Fashion Week.

In 2015, Harlow modelled for the Italian clothing brand Diesel for its spring/summer 2015 campaign, which was shot by British fashion photographer Nick Knight. She modelled for the Spanish and Italian editions of Glamour magazine and was featured in the August/September 2015 issue of Complex magazine.

Harlow was also featured in the August 2015 issue of Cosmopolitan. She was featured on Vogue Italia’s website in an interview and accompanying photo shoot. In August 2015, Harlow shot the cover of and an accompanying editorial spread in the September issue of Ebony magazine, where she appeared alongside former America’s Next Top Model contestant Fatima Siad.

She has also appeared in music videos including JMSN’s “The One,” Eminem’s “Guts Over Fear,” Calvin Harris’ “Promises,” and Black Eyed Peas’ “Where’s the Love?.” She cameoed in Beyoncé’s “visual album” Lemonade and was in a video of Lilly Singh (a.k.a. IISuperwomanII) on YouTube named, “Three Girls, One Elevator.”

This article was taken from: https://www.newsamericasnow.com/