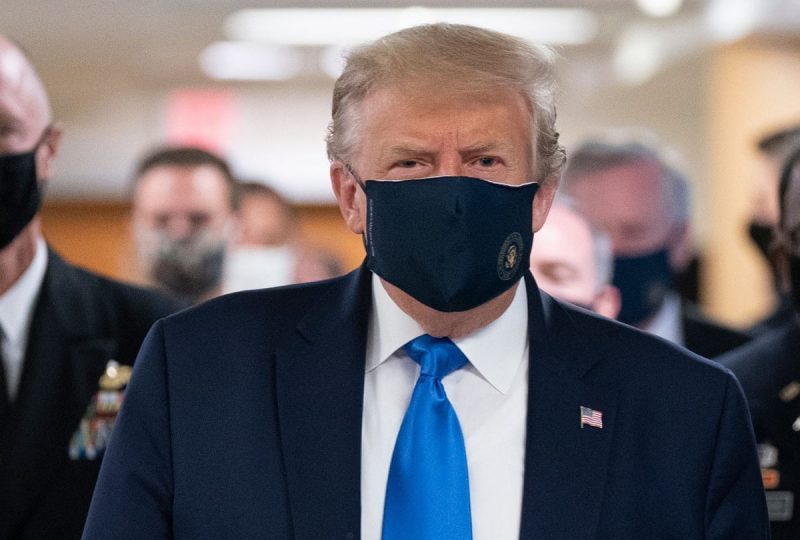 Donald Trump wore a mask in public for the first time during a visit to a military hospital a short helicopter ride from the White House on Saturday evening. The president’s decision to wear a mask came as cases of coronavirus surged to record levels in the US and after aides and experts urged Trump to follow his own government’s guidelines on face coverings.

As he left the White House, Trump told reporters: “When you’re in a hospital, especially … I think it’s expected to wear a mask.”

The only other time Trump was spotted wearing a mask was behind the scenes during a tour of a Ford plant in May, from which a picture emerged.

At the time he refused to wear a mask in public because he said he didn’t want to give the gathered press the pleasure.

In recent weeks, several people working in proximity to the president have tested positive for coronavirus. His son Donald Jr’s girlfriend, Kimberly Guilfoyle, tested positive for Covid-19 before Trump’s rally at Mount Rushmore on 3 July, and the couple had to go into quarantine.

America is breaking records for new coronavirus cases almost every day, and hospitals in the new hotspots in southern and western states are under severe strain. Many believe businesses in those areas reopened too soon, following repeated urgings to do so by the president, without the virus being under control.

Trump wore a dark-colored mask covering as he began his hospital visit on Saturday, walking with an entourage who were also wearing masks.

Most prominent Republicans at national level, including Vice-President Mike Pence and Senate leader Mitch McConnell have belatedly endorsed wearing masks in recent days as the coronavirus has gained ground.

But Pence and Trump had eschewed them during the early months of the pandemic when the virus was raging through parts of California, the Seattle area and New York.

People close to Trump have told the Associated Press that the president feared a mask would make him look weak and was concerned that it shifted focus to the public health crisis rather than the economic recovery.

While he has not worn one himself, Trump has sent mixed signals about masks, acknowledging that they are appropriate if worn indoors when people are close together.

Trump has also accused reporters of wearing them to be “politically correct”, and has retweeted messages making fun of the presumptive Democratic nominee for president, Joe Biden, for wearing a mask.

The subject has become politically divisive, with Republican Senator Lamar Alexander recently lamenting that masks should not be seen as pro-Democrat or anti-Trump.

Official US federal government guidance recommends wearing cloth face coverings to slow the spread of the coronavirus, especially when social distancing is not feasible.

The Associated Press contributed reporting to this story.