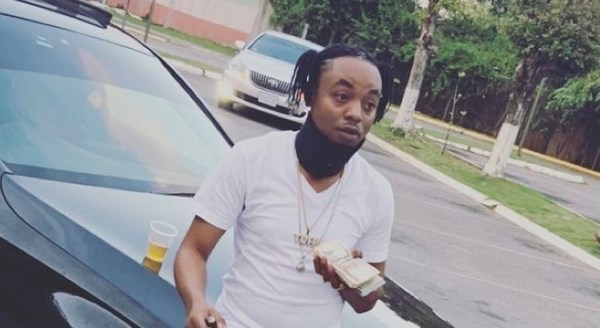 Popular Montego Bay dancehall entertainer Rygin King was shot and seriously injured during a gun attack in Struie district, Westmoreland, on Sunday while a woman, identified as his girlfriend, was killed.

Another male was also shot and injured.

The deceased has been identified as 28-year-old Sashalee Blackwood, a customer service representative of Irwin Meadows, St James.

The incident reportedly took place while the entertainer, his girlfriend, two children, and a group of other persons were travelling through Westmoreland to a function that was being held in a neighbouring parish.

Rygin King was shot several times and had to undergo immediate surgery at the Savanna-la-Mar Hospital in the parish.

Reports by the Bethel Town police are that about 2 p.m., the 25-year-old entertainer, whose real name is Matthew Smith, reportedly left his community in Norwood, St James, with the others.

On reaching a section of the Struie main road, one of the two other vehicles that were travelling with the entertainer got involved in an accident with another motor car. The impact of the crash forced Rygin King and his team to stop at the location for close to 45 minutes while they assessed the damage and conversed with the female driver.

Minutes later, another car arrived on the scene and a man alighted with a handgun, hurled expletives at the entertainer, and chased him. Rygin King was shot several times.

Blackwood, who was sitting with the two children, was also hit.

Rygin King then ran into a gully but was again chased and shot multiple times by his attacker.

The other male, said to be a 25-year-old recording artiste, was shot in the leg.

Rygin King, Blackwood, and the injured artiste were rushed to hospital.

A senior investigator told The Gleaner that the shooting appeared to have stemmed from an out-of-parish dispute.

“The persons involved were just passing through and never intended to stop in the parish had it not been for the accident,” the cop said.

Blackwood’s death brings to 40 the number of persons murdered in the parish of Westmoreland since the start of the year.