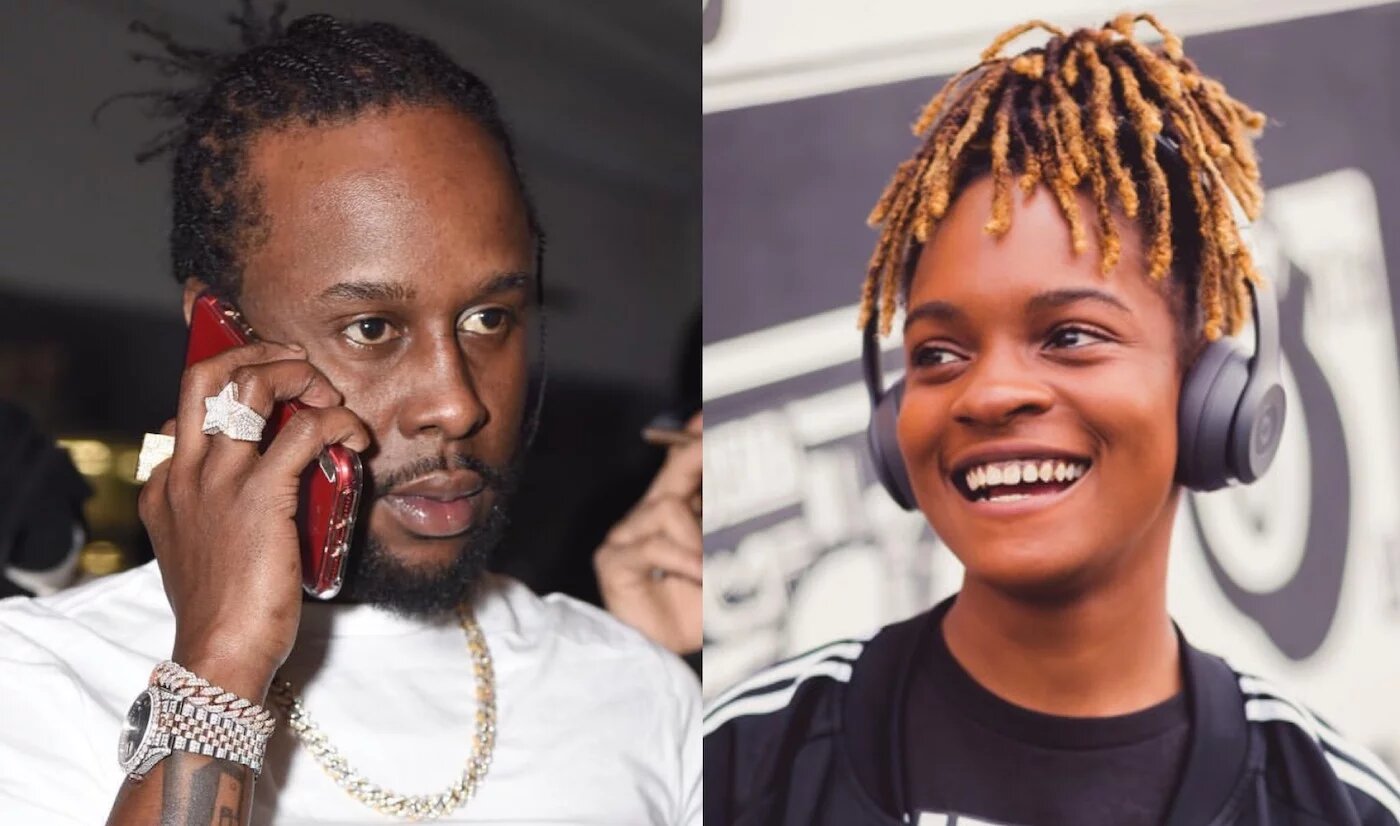 Dancehall artistes continues to drop new music as they vie to dominate the airwaves locally and overseas.

It doesn’t matter if you’re an old head or a new lover of dancehall, as February had a little something for just about everyone. Entertainers wore their emotions on their sleeves or at least pretended to do so. Fear, love, happiness, and anger were all channeled through these greats who have found creative ways to bring common topics to life on beats laid down by some of the biggest producers in the game.

Melody and lyrics so plentiful, the entertainers of one of these most energetic genres in the world gave it their all and then some. February has Reggae month and Black History month celebrations all rolled in one, which at least a few entertainers have considered, as they release songs to match the theme.

The love for weed draws these two icons of Jamaican music together. Mykal Rose has a ‘weed plan,’ Vybz Kartel is down for the execution, and Vybz Kartel’s youngest has the beat to get it done. Rose delivers a short verse, but much of his input comes through the intricate sample throughout the chorus. Kartel does most of the heavy lifting in this one, and he paints a picture of the love he has for the magic plant that the world is just now recognizing. Rose has chanted down Babylon oppressions for years through his own solo projects and his work as the frontman for the famed Black Uhuru group during the 70s to early 80s. It was a great match, and Vybz Kartel has previously shown that he can work with the legends when he sampled Barrington Levy’s track to create “Vybsy Versa Love. “The Weed” is available on all major streaming platforms.

Muir taps herself into the ring to tackle the ever-present issues of racism and colorism. She uses her strong vocals to advocate for change in the future while sharing the experiences of many who have been held down by oppressive forces. Muir presents a strong case from the jump, incorporating the photos of Louise Simone Bennett-Coverley and Marcus Mosiah Garvey Sr into the cover art. The “Yamabella” singer sees the youth as the way to end these forms of separations.

“Tell your children black is beautiful/to be alive is a whole lot of privilege/education is the key to rule the world/you don’t need to be white to be a pretty girl,” she sings.

“Black is Beautiful” is produced by #365 Records alongside Muir’s very own TopGyal Ent.

She is also getting ready to release the music video for the single.

Jah Vinci – Can’t Hold Me Down

The World Singer has had one of the most interesting comebacks in recent years, forging through with the help of producer NotNice, who also hailed from Vybz Kartel’s GAZA camp. A few months ago, the singer dropped his brand new EP titled Passion. The project has received raving reviews from fans who have commended Vinci on trusting his talent and improving his work ethic.

“Can’t Hold Me Down,” produced by Shatess Records And Passadon Music, speaks on the singer’s perseverance through some of his darkest times. Jah’s ability to bring words to life is something that he has been doing since his time on the GAZA, where he was considered the best singer in the camp. Ladies can attest to his abilities on his most recent mega-hit, “Virgin.”

A week ago the entertainer showed off plaques received for his work on NotNice’s Kyng Midas album as well as his Youtube plaque for “Virgin.”

“This is what not giving up looks like #worldsinger #teamnotnicerecords mi proud a wi movements dawg #fullyfocused. BIG THANKS TO THE FANS,” Jah Vinci wrote in the caption.

You can check out “Can’t Hold Me Down” below.

The usually fast spitting deejay opts for a different easy-going flow and a catchy hook as he discusses his painful experiences. Iwaata calls out his doubts about love during the intro of the track, possibly alluding to his personal relationship issues. The deejay sings about his pain from a single microphone in the streets. Oftentimes he finds himself steering into the mirror, contemplating his choices, or reminiscing on conversations with his mom. The single has been getting a lot of praise from fans who appreciate the difference in delivery and the realistic take from the deejay.

Check out one of the top comments below.

“Iwaata Mi Genna You Keep Improving Each And Every Song Dat Mean Seh You Put In A Lot Of Work On Your Crafts. You Are Quite Versatile On Your Riddims And Your Melody Is Something That You Mastered As A Dancehall Artiste. Big Up Yuhself Yute Mi Wish Nuh Ting But Greatness Pon Your Career. Mi Ah Medz The Tune Yah It Hit Mi Dawg. All The Way From Botswana”

Dancehall newcomer Jashii continues to dominate with powerful motivational tracks aimed at uplifting the ghettos. Jahshii is single-handedly pulling up some of his closest companions to have a seat with him at the table of success. He shares his plans in the new single “Promise.”

The deejay found a string of hits in 2021 and has hit the ground running in 2022 with more of the same. The single is produced by Droptop Records, with the man behind the mission making an appearance in the video as he usually does.

Check out the new music video from Jahshii.

The name Kaseeno is quickly finding its way on the tongues of dancehall lovers and critics alike. Whether you are ridiculing the former gospel singer for the change in his appearance or praising him for doing what it takes to shine above the myriad of other entertainers looking to get the break, dancehall fans are talking about Kaseeno.

The deejay has already released several hits, including “Freak,” “Baby Come Over,” “Superman,” and now “Blow You Away” is pulling in more new fans. Kaseeno’s brings a very relaxed approach to the single. The melodies are synonymous with a love song. However, the singjay’s lyrics are anything but that. The intro of the music video definitely foreshadows something gritty, but Kaseeno’s delivery still comes across as a pleasant surprise. Fans are already looking out for bigger things from the Western Jamaica native.

Young DVN Records teamed up with Masicka for “Missing You” and its complete sexual bliss. The concept is nothing new from Masicka and is evidence that he can be consistent in just about any aspect of his musical career. The deejay focuses on a particular female with whom he has amazing sexual chemistry. The song arrives just days before Valentine’s Day and is distributed with a cover image decorated with roses and hearts. You can check out the audio for the track that was sure to stir up some deep feelings on February 14.

The Uptop Boss has proven that he has mastered the art of pleasing his ladies with tracks such as “Stimulate,” “Wata Truck,” and “Love Experience” featuring Jada Kingdom. “Feel It” brings across the same vibe and similar visuals to one of the aforementioned tracks, and fans love it. Much like Masicka, Teejay also provided something for couples during Valentine’s Day. The father of 5 went the extra mile to promote the new single after promising his female fans flowers for the big day.

“Something for the ladies it’s almost valentines weekend I’ll buy you flowers,” he wrote on Instagram.

For many reggae fans, Koffee is their morning cup of Joe, a refreshing representation of music coming out of Jamaica that doesn’t glorify sex, guns, or drugs. The Grammy Kid has found herself at the forefront of reggae rehabilitation. However, the 21-year-old goes about it with her own flare. She teamed up with Afrobeats hitmaker Jae5 to create the song almost two years ago, with the KC Locke music video being released on February 03. The song is the first from her debut album, Gifted, slated to arrive next month. Koffee is expected to embark on her promotional tour in April, where we are sure the entertainer will have some fun.

Good vibes and positive energies are what the singer is aiming for. Check out what she recently told ES Magazine about her album:

“I wanted the album to be less heavy, so I definitely didn’t put as much political ‘Oh, bun Babylon’ type of vibe into this one,’ she mentioned. ‘[I like to think of] the solution rather than reiterating the problem — just come up with something that can make you feel uplifted.”

Happiness is the only thing Chronic Law is seeking in his life right now. As such, his concerns do not lie in cars, houses, or going on tour. “Been cudda tour but me nuh waa nuh vaccine,” the deejay sings. “Nuh Frighten Fi Nuttn” is currently at the number 3 spot on Jamaica’s Youtube Trending list, and it’s not hard to see why. The Lawboss flexes his lyrical muscle, as he always does, and comes up with killer bars that draw references from various elements in his life, including his daughter.

Popcaan tags Imeru Tafari, the son of fire princess Queen Ifrica, to rise above negativity in the new music video titled “Elevate.” Both Popcaan and Imeru spread love and positivity on the track, but there is definitely more meaning behind the Unruly Boss’s climb. The former Portmore Empire deejay has been having some major issues with the people he once classified as close compadres. Artistes like Versi, Jafrass, Cuz and Petro voiced their disgust and disappointment at Popcaan. The “Family” singer has continued to taunt his enemies, and “Elevate” does seem like a subtle way of doing so. The single is also doing well for Imeru Tafari, as his streaming numbers have also elevated to newer heights.

The Spanish Town native is ensuring he leaves his mark in the sand as he claps back at people who criticize his gritty lyrics. There is no doubt that “Rain Like Hail” is dark and a bit scary for some people. No wonder the deejay provided ample warning for viewers with a weak stomach. The young deejay sports a face mask straight out of a 17th-century torture scene as he emphasizes who is really in control.

“Real gunman a we run the island/Me a Skeng-don a me sing the gun song/Me really don’t care who like me entrance,” he sings.

In 2021 Skeng shared that while his lyrics are controversial, it’s his voice that keeps fans coming back for more.

“I think people should know that his confidence and the execution of his tracks are not to promote any violence but give listeners a taste of the real Jamaican streets,” Producer/DJ Antsman said in 2021 while speaking to The Star about the entertainer.