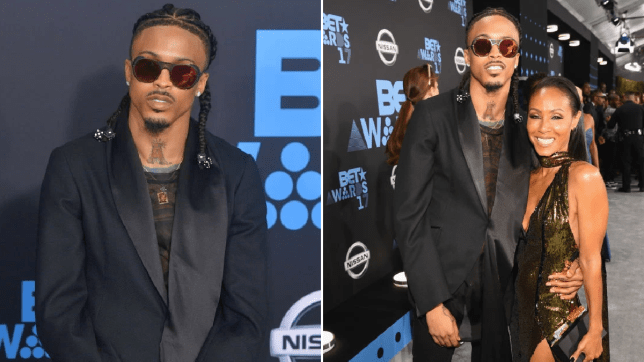 August Alsina has moved fast to capitalise off his drama with Jada Pinkett Smith by releasing a new song called Entanglements following her tell-all interview about their romance. The 27-year-old has teamed up with rapper Rick Ross for the track, which boldly references Jada’s description of her relationship with August as an ‘entanglement’.  During her latest Red Table Talk, the Gotham actress confirmed they were romantically involved a few years ago when she had temporarily split from husband Will Smith.  Since the RTT interview, Jada’s use of the term ‘entanglement’ went viral and now August has offered a precise definition for those who were still baffled.

‘The definition of entanglement is when you’re tangled in the sheets,’ August sings on the track, which was released in the early hours of Sunday.  He adds: ‘Girl I know that we don’t call it a relationship, But you’re still f****n’ with me.’  Rick Ross soon swoops in to drop some not-so subtle metaphors about Jada and Will, rapping: ‘Shawty leanin’ on my shoulder, got her questionin’ my willpower / Jaded by her beauty, but her reputation real solid.

Mornin’ down the hallway, I can tell you how I feel about it / Caught up in the Matrix, and I doubt if I can get up out it.’  Of course, Jada starred in The Matrix Reloaded and The Matrix Revolutions in the early noughties and will reprise her role in the next sequel The Matrix 4.  Shortly before the release of Entanglements, August stated that he agrees with Jada’s use of the term.

He told Vulture: ‘I don’t know why that word is such an issue. I would agree [with Jada]. If you look up the definition of ‘entanglement,’ it is a complex and difficult relationship. It was exactly that.  ‘But I definitely have to agree with it being an entanglement. It definitely was something complicated, a complicated dynamic.’  While speaking to her husband Will on Facebook’s RTT, Jada explained: ‘We were over. From there, as time went on, I got into a different kind of entanglement with August.